Commissioned by the John F. Kennedy Center for the Performing Arts for the 90th anniversary season of the National Symphony Orchestra (2020-21), Balance of Power was funded by former U.S. Ambassador Bonnie McElveen-Hunter, Chair of the Board of Governors of the American Red Cross, in honor of the 95th birthday of her friend and mentor, Dr. Henry Kissinger, former U.S. Secretary of State.

Composed 2019
A commission of the John F. Kennedy Center for the Performing Arts — Commissioned by Ambassador Bonnie McElveen-Hunter for the National Symphony Orchestra of Washington, D.C., Gianandrea Noseda, Music Director, in honor of the 95th birthday of Dr. Henry Kissinger

— Premiered by the National Symphony Orchestra, Thomas Wilkins, conductor, at the John F. Kennedy Center for the Performing Arts, September 18, 2021 (rescheduled from original dates of May 13, 14 & 15, 2021, which were cancelled due to the pandemic)

The process which led to the creation of this orchestral work was not a typical one. In the fall of 2018, I was contacted by Bonnie McElveen-Hunter, former U.S. Ambassador to the Republic of Finland, and a member of the Kennedy Center’s National Committee for the Performing Arts, about a commissioning project. The subject line of her e-mail was striking and unusual, to say the least: “Symphonic Work — Dr. Henry Kissinger.”

Bonnie’s name was familiar to me because of her previous orchestral commissions from composers I greatly admire, including John Corigliano, Richard Danielpour, Lowell Liebermann, and the late André Previn. Her unexpected invitation was for me to compose an orchestral work for the National Symphony Orchestra, in honor of the 95th birthday of Henry Kissinger, her friend and mentor, the former U.S. Secretary of State (born May 27, 1923 in Fürth, Germany). Gerard Schwarz, who had conducted previous works which she commissioned, had suggested me as the composer for this project.

Though of course the prospect of composing a substantial work for the NSO to be premiered at the Kennedy Center was highly appealing, I hesitated before accepting this commission. Bonnie’s request was that the commissioned piece should reflect Dr. Kissinger’s work in some way, though the specifics of this would be entirely up to me. I find the idea of creating a musical work reflecting a contemporary political figure to be quite challenging by nature. Only once before had I composed a piece dealing with political figures, which was The Dream Lives On: A Portrait of the Kennedy Brothers, the Boston Pops 125th anniversary commission, in 2010. For that project, I had the luxury of employing famous narrators to read the words of John, Robert, and Ted Kennedy with orchestra and chorus, and those iconic words had made it clear what my task would be as a composer.

By contrast, for this NSO commission, there would be no texts or narration, but “only” an orchestral work. Dr. Kissinger would be the dedicatee, but he would not necessarily be its “subject” in a direct way — yet somehow the piece had to relate to him. My knowledge of Dr. Kissinger’s work at that point was fairly minimal, but knowing that he had served in one of the most controversial presidential administrations gave me serious pause. I thought that perhaps this would be too challenging a project to undertake.

However, Ambassador McElveen-Hunter is persuasive, and she offered to arrange a lunch with Dr. and Mrs. Kissinger in New York City to discuss this potential project. How often does a composer receive an invitation to dine with someone who directly impacted world history? I accepted, and this lunch took place in January 2019. In discussing the work to be composed, Dr. Kissinger had two brief cordial requests, delivered in his well-known German-accented low voice: “Please don’t make it too abstract, so I can understand it”; and “Could it be a humorous symphony?” I was not expecting either of these requests, but resolved to accommodate them (though the orchestral work would not be a symphony per se).

After accepting the challenge of this commission, I began to do research. The literature by and about Henry Kissinger is voluminous, to say the least; and the latter encompasses wildly divergent points of view. I realized that I could digest only a fraction of this, but over the course of several months, I read lengthy biographies by Walter Isaacson and Niall Ferguson, and Kissinger’s own monumental Diplomacy and World Order. (His three massive volumes of memoirs were simply too much for me to tackle before composing.) While of course I am not a historian, reading these roughly 3,000 pages over several months greatly increased my knowledge of this fascinating and influential figure, and the depth of his intellect — not to mention his remarkable service in the U.S. Army Counter Intelligence Corps as a young man in World War II, of which I had been completely unaware.

More importantly, this research led me to a framework for the piece, as well as a title: Balance of Power. This is a concept that runs very strongly through Dr. Kissinger’s thinking and writing (one can find this phrase on nearly every page of Diplomacy). Crucially, this orchestral work does not attempt to be either a “biographical portrait” or a political statement of any kind. What it does attempt to do is present three separate and contrasting movements that relate in different ways to this unique individual. The movements are titled “A Sense of History,” “A Sense of Humor,” and “A Sense of Direction.”

“A Sense of History,” the first movement, takes its musical cues from Dr. Kissinger’s profound understanding of history, how it has unfolded, and the idea of a balance of power — which, as a metaphor, provides a fascinating orchestral canvas to explore. In reading Diplomacy and World Order, I felt a greater understanding of world historical events, power struggles, and conflicts, and of how history has been shaped by these dramas over the centuries. This suggested to me the nature of the music. The movement begins with an expansive slow tempo theme played by a solo horn accompanied by strings and harp — this might be thought of as a “history theme” — which is then developed by woodwinds and violins. This leads to a fast tempo, agitated middle section, with angry outbursts from the full orchestra and relentlessly repeated rhythmic figures, which suggest conflict and battle. This section reaches a dramatic climax, with the entire orchestra playing emphatically at full volume. Following this, the energy dissipates and the slow tempo returns, with a somber march-like passage setting the stage for a return of the “history theme” in the closing section.

The tone changes drastically with the second movement, “A Sense of Humor,” which was composed directly in response to Dr. Kissinger’s request for humor mentioned above — this from a man renowned for his wit (which biographer Niall Ferguson likens to that of the Marx Brothers). It was clear to me that this movement needed to be a scherzo (Italian for joke), and its subtitle is Scherzo politico. The music’s uneven 7/8 meter and its repeated rising-then-falling, “going nowhere” figures give it, I hope, a kind of fun and off-kilter quality. In a tongue-in-cheek reference to Kissinger’s famously low basso speaking voice, the central section of this movement is a duet between contrabassoon and bass clarinet, the two lowest voices of the standard woodwind family (this is certainly the only duet passage for these particular instruments I have ever composed!). I think of this section, in which these low-pitched instruments toss blues scales back and forth at each other, as brief “musical negotiations.”

The third movement, “A Sense of Direction,” contrasts greatly in tone from both previous movements. The phrase “a sense of direction” jumped out at me from several pages of both Diplomacy and World Order, in which Kissinger praised statesmen who possessed this quality of a vision for the future. Musically, these words suggested to me a propulsive quality, which I tried to evoke by the repeated pulsating chords, played by strings, marimba and vibraphone, which begin the movement. These simple harmonies, repeated over and over in a rhythmic pattern, suggest to me a kind of engine or motor that is driving us toward a brighter future. A faster rhythmic motive introduced in brass and woodwinds is clearly upbeat in tone. This material is developed throughout the orchestra, and then the mood gradually shifts, and the “history theme” from the first movement reappears, again played by a solo horn, in dialogue with celesta. After this moment of reflection and relative calm, the marimba brings back the pulsating chords, softly at first, but quickly gathering energy across the orchestra, to usher in a highly affirmative closing passage. The tone of this movement is frankly much more upbeat than one might expect after absorbing some of Dr. Kissinger’s writing, which is often sobering in outlook; but I felt that focusing on his phrase “a sense of direction” afforded me some creative license to be optimistic here. The United States and the world have faced, and continue to face, some profoundly challenging times; but believing in music’s power to provide uplifting experiences which are sorely needed, I chose to end this piece in an optimistic manner.

Finally, I must mention that as an American composer, it is a great honor to be commissioned by the John F. Kennedy Center for the Performing Arts, the national cultural center of the United States. I would like to thank Deborah Rutter, President of the Kennedy Center, and Nigel Boon, Director of Artistic Planning for the National Symphony Orchestra, for their support during the creation of this work.

I. A Sense of History

III. A Sense of Direction 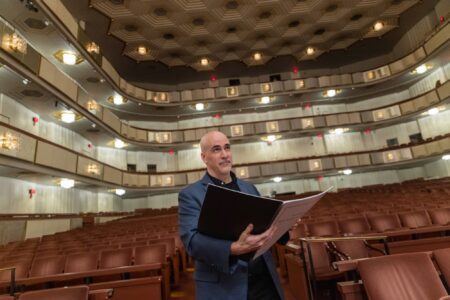 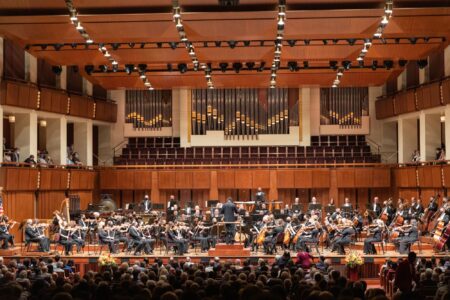 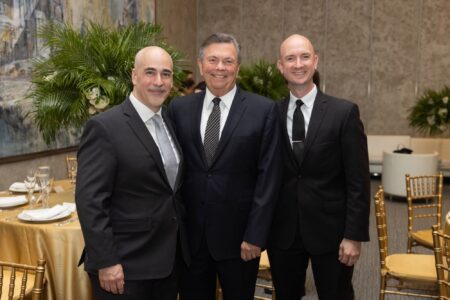 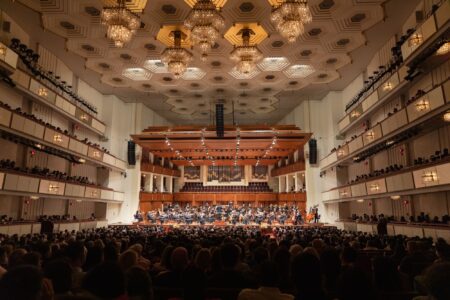 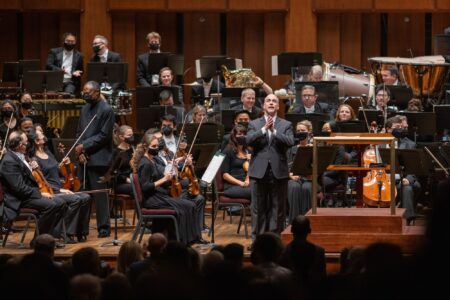 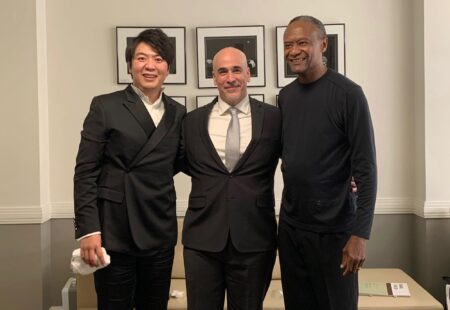 The Kennedy Center premiere of Balance of Power with the National Symphony Orchestra and conductor Thomas Wilkins, September 2021.
Photos by Dan Chung (except final photo with Lang Lang, by Megan Guo).