Concert Music
“The huge final strains were met with an enthusiastic standing ovation by a most appreciative audience.”
— Battle Creek Enquirer

Continental Harmony links communities with composers through the creation of original musical works.
The program is a partnership of the American Composers Forum and the National Endowment for the Arts, with additional funds provided by the Rockefeller Foundation.

“The highlight of the evening was the world premiere performance of Peter Boyer’s Dreaming a World… Boyer is one of several young American composers making a name for himself and I would say he certainly knows his craft. The influence of his work in film and television is apparent, and he achieves the desired effect. The sheer size of the sound created by the 400 performers was notable… The huge final strains were met with an enthusiastic standing ovation by a most appreciative audience.”
— Battle Creek Enquirer

I was very pleased to be chosen as the composer for the Continental Harmony project in Battle Creek, Michigan, having been well acquainted with the American Composers Forum’s innovative and successful program which pairs composers and communities around the United States. I knew that the Battle Creek project would be one of the more ambitious and challenging of the Continental Harmony projects, as it would call for a very large and diverse assemblage of musical performers.

The initial “theme” of the project was a celebration of multiculturalism in Battle Creek. After my initial visit to Battle Creek to meet with many of those involved with the project, Anne Harrigan, Music Director of the Battle Creek Symphony Orchestra, and I agreed to seek a broader view of this theme. The goal became the creation of a work that would celebrate multiculturalism not only in Battle Creek, but in a more general, universal sense. In today’s increasingly multicultural world, this seemed an appropriate, if challenging, theme for a large work created for concert performance.

I believed that the key to the structure of the work would be found in the texts to be spoken or sung, and the task of identifying and assembling an appropriate group of texts became the first challenge of the project. This proved to be a much more daunting task than I had imagined, and the process of researching and seeking out texts took several months—nearly as long as the process of composition itself. I sought texts that addressed the concept of the unity of all people, regardless of diverse backgrounds. More importantly, I sought texts that were poetic and which I thought would be compelling in the context of a musical presentation. This led to some interesting discoveries. I certainly had never previously set such an eclectic group of texts as are represented in this work, Dreaming a World, which is in five movements, each of which sets a text from a different source or sources.

During my visits to Battle Creek, I visited the Nottawaseppi Huron Band of Potawatomi Indians, and these visits led me to seek out Native American texts. I came upon an English translation of a Native American prayer which had the quality of an invocation, and the setting of this text became the basis of the first movement, “Prelude, Invocation, and Dance.” In this movement, the choir sings without text, in a way that is almost chant-like, and the colors of the wordless choir join with the colors of the orchestra, with the percussion instruments playing a prominent role.

The second movement, “Voices of Unity,” is the section of the work which addresses the theme of multiculturalism most directly. In my search for texts which celebrated unity, I came upon various quotes by great leaders which I found inspiring, both for the moral power of their message, and the poetic qualities of their words. Wishing to employ a number of short quotes from a diverse group of leaders, I included brief statements from Dr. Martin Luther King, Jr., Maya Angelou, César Chávez, John F. Kennedy, and Mahatma Gandhi, and I wrote a few lines to frame these quotes and put them in context for “us,” the listeners to these voices. In my visits to Battle Creek, I had met with various members of its African-American musical community, and observed some of the styles of Gospel music performance which are a vital expression of that community. I was struck by the passion with which this Gospel music is performed, and wished to incorporate some Gospel-style music into my work. I decided to close the “Voices of Unity” movement with the famous and powerful Gandhi quote, “You must be the change you wish to see in the world,” and to attempt to set that quote in Gospel style. Though on the surface, “Gospel Gandhi” might seem an odd combination, I believe this actually worked well, and I think that Gospel music, with its passion and energy, suits Gandhi’s message of personal and social change quite naturally.

The third movement, a setting of the Langston Hughes poem “I Dream a World” for children’s chorus, joined by mixed chorus and orchestra, is central to the work both in placement and in spirit, and it suggested to me the title for the larger work, Dreaming a World. In my search for texts, this was the first one I found that I immediately knew was “right” for the project, and this was the first music I composed. Hughes was one of the great American poets of the twentieth century, and I have been drawn to many of his poems which poignantly evoke the blues, and which have been set effectively by many composers. “I Dream a World” clearly and simply hopes for a reality in which people of all cultures peacefully coexist. As I read the words, I immediately imagined them sung by children’s voices, and I set this text as a simple, “anthem”-type melody for children. Knowing that in Battle Creek these words would be sung by children of various cultural backgrounds made the text seem particularly appropriate.

The original concept for a musical point of focus for this project had been drumming as a multicultural phenomenon. As the project evolved, this idea became but one component of the project, rather than its central theme, and this concept gave rise to the fourth movement. In seeking texts which might provide a verbal context to connect the idea of drumming with the rest of the work, I came upon “The Great Drum,” an English translation (or perhaps “re-imagining”) of a Native American “myth poem,” published in 1922 by Hartley Alexander, who seems to have been one of the more sensitive Anglo voices translating Native American languages at that time. This is surely the most unusual movement of the piece from the point of view of performing forces, as it employs only narrator and non-pitched percussion instruments, both onstage and offstage. The offstage percussion parts are to be played by high school players, and the parts they play arise from transcriptions of traditional West African/Ghanaian drumming patterns. This requires the coaching of a percussionist experienced in multicultural drumming styles; in the case of the premiere performances, Carolyn Koebel ably fulfilled this role.

For the fifth movement finale of the work, I turned to the American poet who may be the favorite of American composers (certainly of mine): Walt Whitman. I have set Whitman on several occasions, and I never cease to find his unique voice compelling. To close Dreaming a World, I chose a famous passage from the end of “The Mystic Trumpeter,” a passage which has inspired settings by a number of composers. Here Whitman ecstatically imagines “a reborn race” and “a perfect world” with “war, sorrow, suffering gone.” His utopian vision, in which all humankind is united (I particularly admire the notion of “universal man”) repeats the word “joy” no less than thirteen times in its dozen lines. After a brief fanfare-like opening, the narrator breathlessly exclaims these lines, supported by the orchestra and initially wordless choruses (children and adults); then the choruses take over the final ecstatic line “Joy! joy! all over joy!”, and repeat it with increasing fervor to the work’s conclusion.

A demo recording is available upon request from Propulsive Music.

Photos from the Battle Creek premiere 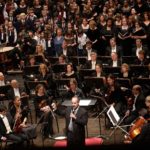 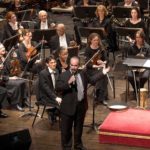 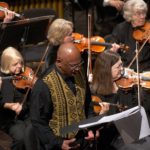 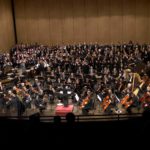 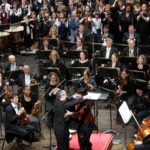