Concert Music
“Peter’s composition On Music’s Wings represents one of the most successful musical experiences in my career to have connected a symphony orchestra to its community.”
— Carl St.Clair, Music Director, Pacific Symphony

On Music’s Wings may be performed as a complete, six-movement work of 30 minutes’ duration; or any of its individual movements may be performed separately. Silver Fanfare was conceived as a virtuoso orchestral concert opener, and has had a significant performance history by notable orchestras as an independent work. That Music Always Round Me (Whitman), To Music (Rilke), and Music (Aiken) are of a choral difficulty level suitable for skilled high school or college choirs (or professional). The Aim Was Song (Frost) is an a cappella setting of greater difficulty, suitable for highly skilled college or professional choirs (and may be omitted from a performance of the complete work). On Music’s Wings: An anthem for children (Boyer) is the most easily accessible of the choral movements, and may be performed by SA children’s choir with piano accompaniment, with optional parts for SATB chorus (suitable for high school level).

To be asked to compose a major work in celebration of the 25th anniversary of the Pacific Symphony, employing not only large vocal and orchestral forces, but also hundreds of children from throughout Orange County, was both a great honor and a great challenge. For this exciting occasion, it seemed fitting to select a number of texts which celebrate music, and each of the poems I chose did that in its own way. It is a reflection of music’s unique power that it can draw such diverse and celebratory poetic responses. For the work’s finale, for which I was asked to compose an anthem that would be appropriate for children, and would celebrate music’s role in our lives, I searched in vain for a suitable text, and ultimately chose to compose the lyrics for this anthem myself. I reflected on music’s power to transport us to a place where “there are no walls to divide us,” and came to believe that “on music’s wings” would be both an apt metaphor, and would suggest imagery to students who were asked to create visual art for use in tandem with the music. We whose lives are touched by music are fortunate indeed, and I hope that in some small way this work helps to celebrate both the Pacific Symphony’s momentous occasion, and music, that wondrous creation, itself.

On June 13, 2004, a huge assemblage of musicians, singers, and children gathered at the Pacific Amphitheater in Costa Mesa to give the premiere performance of Peter Boyer’s On Music’s Wings, in celebration of the 25thanniversary of Orange County’s Pacific Symphony. Approximately 900 performers participated in the finale of Boyer’s six-movement, 30-minute work. The onstage forces numbered 300: soprano Shana Blake Hill, baritone Douglas Webster, the All-American Boys Chorus, the 16-voice John Alexander Singers (the core group of the Pacific Chorale), the 120-voice All-County High School Honors Chorus (drawn by invitation from schools throughout Orange County), and the Pacific Symphony, all led by renowned conductor Carl St.Clair.

These forces performed Silver Fanfare, the first, orchestra-only movement; That Music Always Round Me, text by Walt Whitman; To Music, text by Rainer Maria Rilke translated by Stephen Mitchell; The Aim Was Song, text by Robert Frost; and Music, text by Conrad Aiken. The finale of the work was something special. As part of the Pacific Symphony’s commission, Boyer had been asked to compose an anthem for children which would celebrate the power of music, and which could be performed by schoolchildren throughout Orange County prior to this concert. Boyer composed both lyrics and music for On Music’s Wings, the anthem which gave the larger work its name. Choruses from more than a dozen elementary and middle schools around the County had performed On Music’s Wings with piano accompaniment on their own school concerts, from March through June. On June 13, all these children came together to form a massive “anthem chorus” of 600 voices for the Celebration of Music. As the sixth and final movement of Boyer’s work began, these children began processing into the Pacific Amphitheater, surrounding the audience on all sides while singing. Yet even these 900 performers were not enough: the audience was provided with a lead sheet of the anthem’s words and music, and Carl St.Clair invited the audience to join in singing for the final refrain, bringing literally thousands of voices together in celebration of music. 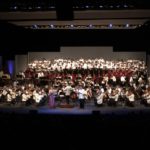 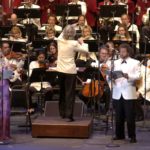 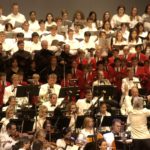 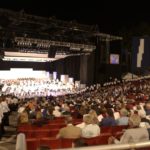 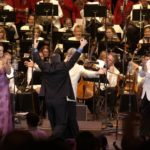 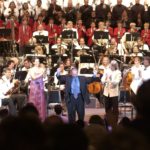 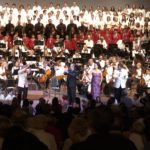 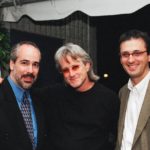