The John F. Kennedy Center for the Performing Arts has announced the 2020-21 season of the National Symphony Orchestra, Gianandrea Noseda, Music Director — its 90th anniversary season — including a commission for a substantial new work by Peter Boyer.

Boyer’s new work, Balance of Power, will have three performances by the NSO on its main classical series at the Kennedy Center on May 13/14/15, 2021, conducted by Thomas Wilkins. Information about these concerts may be found here. The full season announcement may be found here.

Funding for this commission has come from Bonnie McElveen-Hunter, former U.S. Ambassador to Finland, Chair of the American Red Cross Board of Governors, business leader and philanthropist. Ambassador McElveen-Hunter has a significant history of commissioning orchestral works from leading American composers, including John Corigliano, Richard Danielpour, Lowell Liebermann, the late André Previn, and Anna Clyne, which have been premiered by conductors including Gerard Schwarz and Marin Alsop.

Each of the works which Ambassador McElveen-Hunter has commissioned has been dedicated to personal friends or family members of hers, and this new work follows this pattern. The work’s dedicatee is Dr. Henry Kissinger, former U.S. Secretary of State, in honor of his 95th birthday (which was in 2018). Balance of Power is a key concept running through Dr. Kissinger’s thinking and writing, including his influential books Diplomacy and World Order.

Balance of Power is one of five new works to be premiered by the NSO in its 90th anniversary season. The composers of the other new works are Michael Daugherty, Jessie Montgomery, Esa-Pekka Salonen, and Julia Wolfe.

Boyer stated, “I’m grateful to the Kennedy Center, its President Deborah Rutter, and the staff of the National Symphony Orchestra for entrusting me with this important project. As an American composer, it is a distinct honor to be commissioned by our national performing arts center. I’m also humbled to be in the company of such an esteemed group of composers who have been commissioned for the NSO’s 90th anniversary season.”

Though the commission has just been announced publicly, Boyer has already completed and delivered his new 18-minute, three movement work to the National Symphony Orchestra. 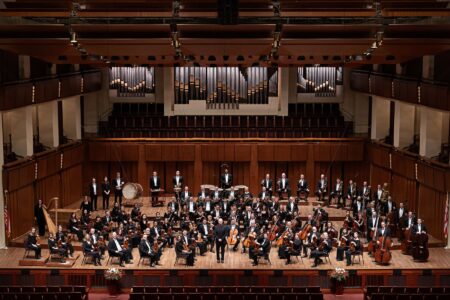